Turid Seier (portrayed by Henriette Steenstrup) is a main character in the Netflix Original Series Ragnarok. Turid is the mother of Magne and Laurits. She was an accountant at Jutul Industries A/S, until she was fired for being the mother of Vidar's illegitimate son, Laurits. Now she works as a cashier at the supermarket.

Turid has shades of being a struggling single mother. She can't afford a lot of new things for her sons, and she is anxious when Magne wants to write his paper criticizing Jutul Industries because she can't afford to lose her job there, and is also scared that this will lead to Magne ending up in prison because of the dog incident. So, being a weak person, she sides against her own son. When Magne is eventually expelled from school, Turid becomes depressed and lies on the couch eating masses of chocolate. Laurits' comment to Magne implies that this isn't the first time that this has happened.

Turid gets very well along with Erik to the point that she invites him over for dinner.

More than once in the series it is suggested that Turid and Vidar had a quick romance or at least were interested in each other. 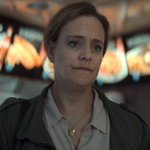